The Society of St Augustine of Canterbury

A week ago The Tablet announced that the Hon. Sir Charles Russell had undergone a successful operation and that his condition was satisfactory. No apprehension was felt as to the outcome; his very wide circle of friends looked forward to a steady recovery and return to duty. Grievous, therefore, in the extreme was the unexpected news in last Tuesday’s evening papers that Sir Charles had succumbed to his illness earlier in the day. By his death the legal profession loses a distinguished member, whilst many Catholic organizations will mourn an active helper. His work as a solicitor, in connection with a number of prominent cases, has been dwelt upon in the public press, which has also chronicled particulars of his public services as a member of the London County Council (1910-13), Chairman of the Collection Committee of the British Red Cross Society during the War, and solicitor on the British side in the Behring Sea Arbitration. The present notice is therefore confined principally to those aspects of Sir Charles Russell’s activity which showed him in the role of a zealous Catholic layman.

The second son of the late Lord Russell of Killowen, Sir Charles Russell had something of his father’s power as a speaker; and in later life particularly he developed a strong facial likeness, so much so that men who met him after a number of years had more than once been heard to declare that the “Lord Chief” had come to life again. Sir Charles was born in 1863, and like so many of the Russell family went to be educated by the Jesuit fathers at Beaumont. Long after he left the college he and his brother the Judge were among the welcome figures whom one looked to see in the hall and on the lawns at Old Windsor for the Speech Day celebrations.

In his Catholic work, into which as a young man he threw himself with almost amazing ardour, Sir Charles Russell will be remembered in particular as a foremost advocate on behalf of Catholic education and Catholic organization. When our schools were threatened, many years ago, under the provisions of Mr. Birrell’s Education Bill, Catholic demonstrations of resistance were planned and held, with the ultimate triumph of victory, in London and the Provinces. The great gathering which packed the Royal Albert Hall and left a vastly larger concourse to overflow into the surrounding streets and spaces, had Sir Charles for one of its chief speakers. He went also into some of the provincial centres, and there addressed similar large gatherings. The need for Catholic organization for protective purposes in this and other matters led to the creation of the Westminster Catholic Federation. That body was largely organized, in its initial stages, by Sir Charles Russell ; he became the Federation’s first President, and on relinquishing that post was given a Vice-Presidency of honour. In 1908, the year of the International Eucharistic Congress in London, he presided and took the helm at the inauguration of a still wider movement, the Catholic Confederation of England and Wales. Something of his vigorous spirit in these matters may be found echoed in his pamphlet on The Catholics of London and Public Life. Another Catholic organization in which he was a moving figure is the Society of St. Augustine of Canterbury, launched a few years ago : of that body he was Vice-President, and he took a leading part in its work. Since 1906 he had served on the Executive of the Catholic Education Council. In politics Sir Charles Russell followed his father in the Liberal camp. He twice sought, unsuccessfully, to enter Parliament, as a candidate for Central Hackney in 1895, and for South Salford in 1910. In 1916 he was created a baronet ; and in 1921 he was made K.C.V.O. and a Knight of Grate of the Order of St. John. His nephew Mr. Alec Russell succeeds, by special remainder, to the baronetcy.

This obituary was first published in The Tablet on 31st March 1928.

Some informal snaps of Sir Charles, kindly supplied by his great grandson, follow. 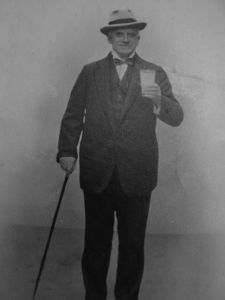 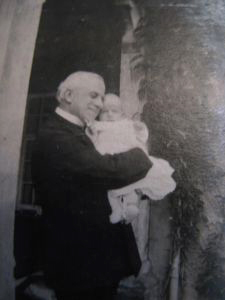