The Society of St Augustine of Canterbury

Archbishop’s House is the residence of the Roman Catholic Archbishop of Westminster, designed in the 1890s by John Francis Bentley and built between 1902 and 1903 in the distinctive orangey red brick that is a key characteristic of buildings in the surrounding streets.

John Francis Bentley was considered the most influential 19th Century Roman Catholic architect in Britain after A W N Pugin. He trained in the office of Henry Clutton, who made the first designs for the Cathedral and became a Catholic in 1861, the year before he set up in practice. Bentley spent five months in Italy working on its design in the Italo-Byzantine style, drawing on St Mark in Venice, St Sophia in Constantinople and San Vitale in Ravenna.

The history of the house is interwoven with that of Westminster Cathedral. After the re-establishment of the Catholic Hierarchy of England and Wales by Pope Pius IX in 1850 many newly emancipated Catholics wanted to build a suitable Cathedral in London. In 1882 Cardinal Manning bought Tothill Fields, which included the former Middlesex County Prison for women. Unfortunately he died before any building could be planned or constructed. His successor Cardinal Vaughan commissioned John Francis Bentley to design Westminster Cathedral, Clergy House and Archbishop’s House and adjoining buildings. 1903 saw the completion of construction work.

The new Archbishop’s House in Ambrosden Avenue replaced the former home of the Archbishop’s in Carlisle Place. To many, the masterpiece of the house is The Throne Room.

Archbishop’s House is both the official and private residence of the Archbishop and his personal staff. It undoubtedly plays a significant role in the life of the Church and therefore its upkeep is an important contribution to the overall wellbeing of the Roman Catholic Church throughout England and Wales.

Archbishop’s House is located in Ambrosden Avenue, Westminster, London, SW1P 1QJ. Members of the Society enjoy an annual reception in The Throne Room after the AGM.

These pictures were supplied by and are copyright the Country Life Picture Library. 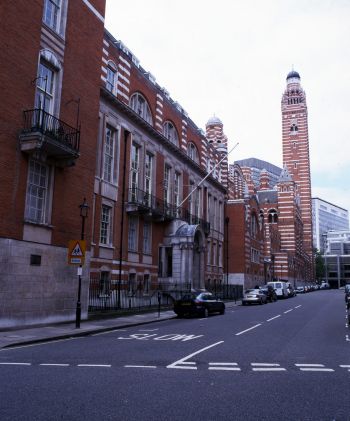 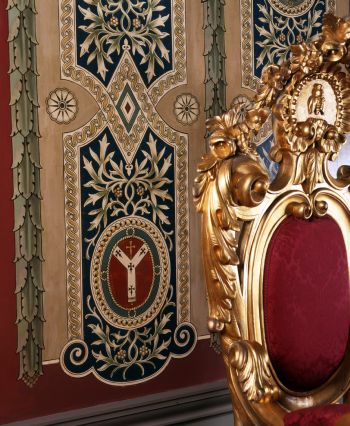 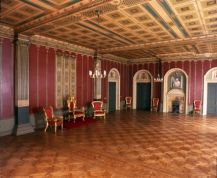